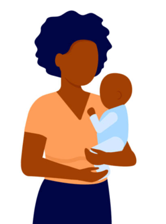 My name is Janet and I’m 25 years old.  When I got referred for services, I was an emotional wreck and had lost all hope.  I didn’t believe that it would ever be okay again and I was ready to give up as a person.  I was homeless for two years, living in a car, outside and in shelters.  I didn’t want to ask for help. I thought I could figure things out for myself, like I had always done. And finally, I figured that I just couldn’t.

When I first came, I really didn’t want to, I thought “this isn’t for me.” I convinced myself to come, by telling myself “I’ve just got to do this,” a final push. The reality was that it was a big help and a big relief. In therapy, I was letting stuff go, the anger, depression, hurt, the crying. I learned a different way to be- that I can ask for help if I need it. That some people do care and that some people in the world are sincere and kind. I hadn’t ever experienced this before.

PACS was a center point for me. Here, I was able to express my thoughts and opinions and to get clarity. Before, I didn’t have anyone to tell anything to. I used to think everyone was judging me and that no one could understand where I came from. I was 5 months pregnant when I came to PACS and even though I was homeless, I didn’t expect housing help here, I just thought I would talk about my problems. Once I got here, I learned that they have people for everything, this person for this and this person for that. The people here were putting in a lot of effort and it is really special.

I was at a point where I did not believe in people anymore and here, I gave them a chance to help and they actually came through for me, this is remarkable!

Today, 13 months later. I have a healthy daughter that I love and I’m motivated to create a great life for. When I was 9 months pregnant my therapist at PACS found me a shelter, a place I could live safely and comfortably and bring my daughter back to from the hospital.  When she called me that day and told me to come right away because she had found me housing, I didn’t believe her, but I came anyway because I trusted her. It was a miracle. That same day I got a safe place to live and a few weeks later I brought my daughter home to a warm home that was my own. My therapist and case manager at PACS helped me to get approved for a Section-8 housing voucher and I received it one month ago. My case manager, even when I was frustrated, she kept calling me and was there for me when I had to go to the interviews at the housing office. I am currently looking for permanent housing. I also started a full-time job at the airport and have been earning a stable income and saving money for our future.